We have seven different egg laying breeds that we raised since they were day old chicks. Each chicken is unique and I’ll tell you why! 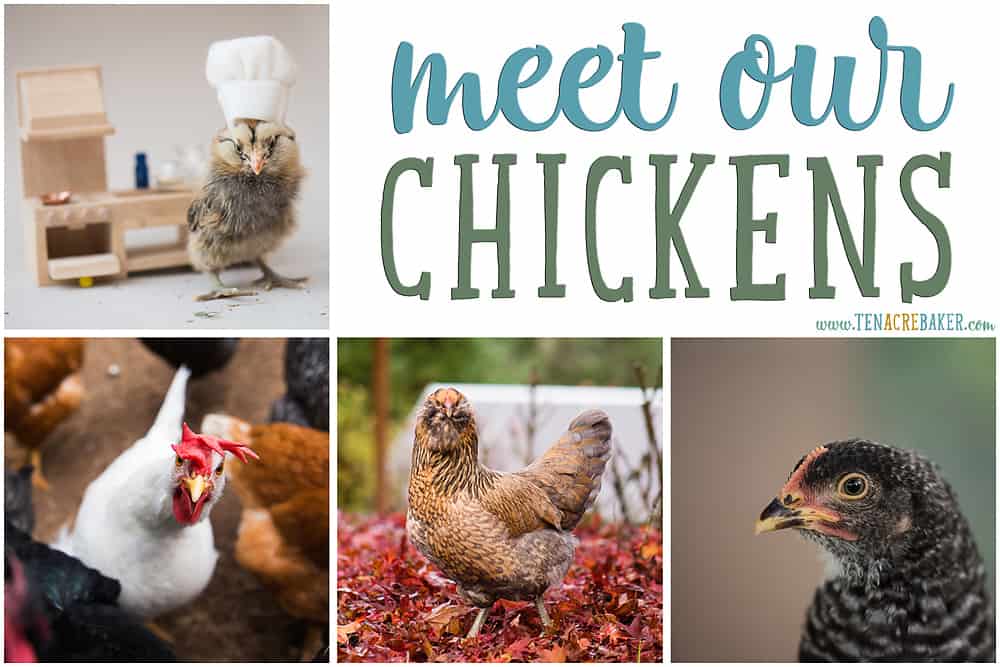 Pin it to your BACKYARD CHICKEN BOARD to SAVE it for later!

The day after we moved to our 10 Acre home in May 2017, 23 day-old baby chicks arrived via USPS. I ordered 7 breeds, 3 chickens each. The hatchery threw in two extra chickens in case any of them didn’t make it.

As a first time chicken owner, I am so pleased that 15 months later, we only lost one chicken to a predator. By some miracle, even though I had no idea what I was doing, the rest of our flock is thriving.

When it comes time to add more chickens to our flock, there are certainly new breeds that I’d like to add based on what I’ve learned from other chicken owners, but for now we’re very happy with our little ladies.

We average 14-20 eggs per day varying in colors including white, cream, light brown, brownish pink, dark brown, blue and green. Our backyard chickens not only provide us with outstanding eggs, but they are an endless source of entertainment for our entire family. We spend many evenings in the backyard watching “chicken TV”.

I originally had removed the white leghorns from my order because I was told they were “flighty”. I paid the extra $5 to change my order to add them back in and I’m so glad I did.

White leghorns are the smallest breed that we have, but they never get picked on. They were the first to start laying and each lay an egg almost every single day. They are the workhorses of our flock.

Of our three chickens, Salt is by far the smartest and our favorite. My daughter wrote each of their descriptions below:

We ordered three Easter Eggers but the hatchery gave us an extra one. Easter Eggers aren’t exactly a defined breed, but they are any kind of chicken that contains a blue egg gene. They can usually be easily recognized by puffy cheeks and a beard. My bearded ladies.

Our Easter Eggers all have very different personalities. They are fantastic chickens. Not only are they regular egg layers, but they are great for holding.

My daughter wrote their descriptions as well and we love these gals so much that they each got their own spread:

Kylie– Kylie is a really pretty chicken. I honestly have no idea why we named her Kylie, I’m just assuming we ran out of names so we just picked one from a random list. Any way, Kylie use to make us soooo mad because she would only lay underneath the coop! We had to use a stick to get the eggs out from under and they broke sometimes! She is the chick that my mom photographed with the cute toy kitchen and chef’s hat. I personally think that her eggs are beautiful, and I’m sure everyone else does too. The eggs are greenish in color, and they have orange and healthy yolks. When Kylie was little, she’s used to be a lot friendlier, and now she usually prefers to stay on the ground instead of being picked up and held. She started pooping on only me (it’s like I’m a poop magnet) in her early teens. Kylie’s eggs aren’t the only thing pretty things related to her. Her feathers are also very pretty. They are mostly black with some specks of brown, and when the sun shines on her feathers, it looks like they’re a shimmery green. 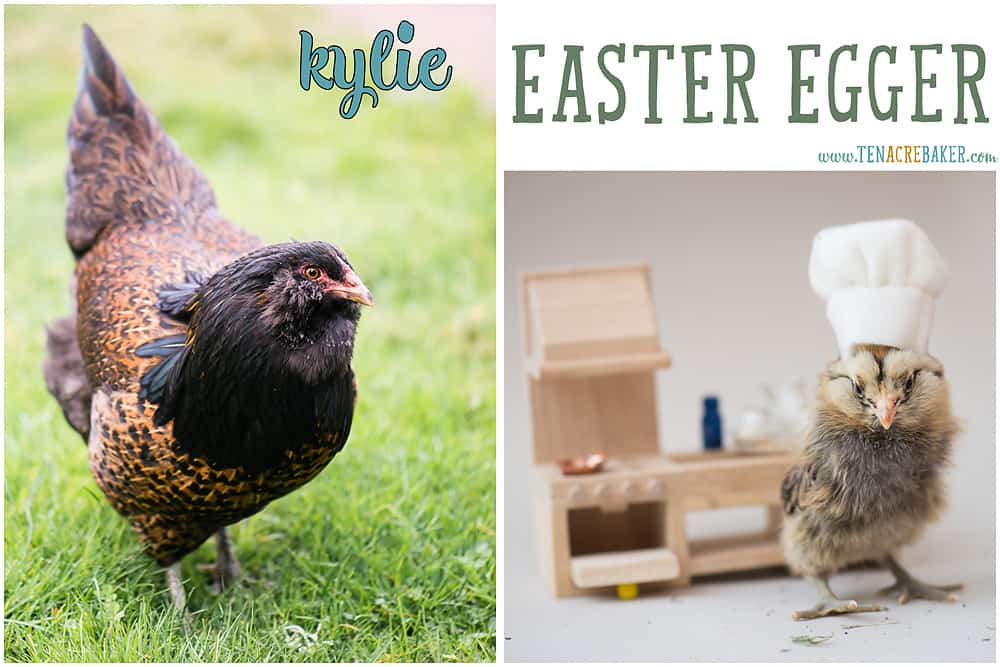 Pepper– Pepper was our last Americana to lay. Most of my friends call her Evil McPepper because her face makes her look evil . She has beautiful yellow and silver feathers, and lays really pretty green eggs. I remember naming her Pepper because pepper makes you sneeze, and I know it’s weird but it reminds me of the evil chicken that lays green eggs. When she was little it was super hard to catch her and when we did she was always struggling to be free. Now it’s easy to catch her because she squats and does not move (it’s a female chicken’s instinct), and she’s a surprisingly friendly chicken now (I don’t know how she became friendly). 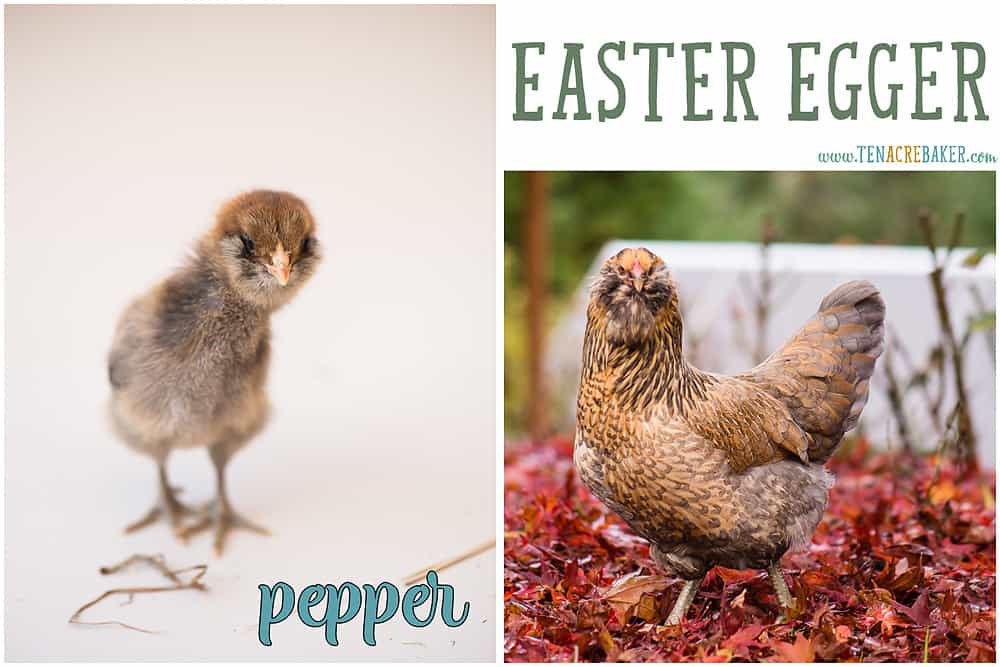 Ella– Ella is definitely not the smartest chicken. My whole family feels really bad for her because she is at the waaaaay bottom of the pecking order. The other chickens are so mean to her. At least at our house, the chickens never pick on their own breed. I have absolutely no idea why, but she always poops on me and never anyone else! That’s why I never hold her. We always think she’s doing dumb things, but once in awhile she wows us with her super tiny brain and manages to find a clever way to get out. Ella lays baby blue eggs. We named her from a random list and just picked one out. 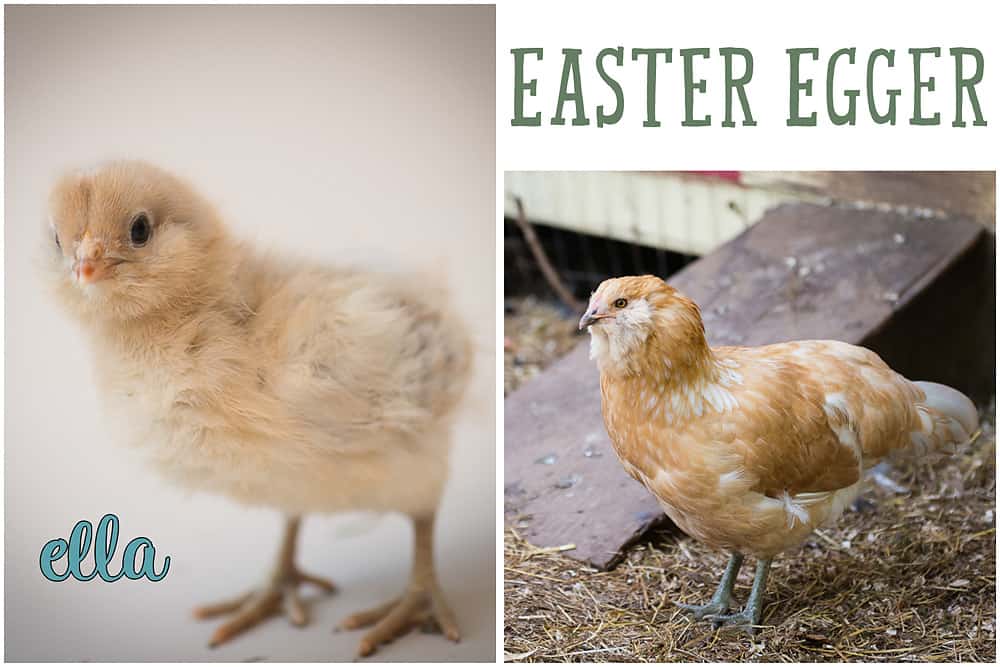 Autumn– Autumn is an odd chicken. We named her Autumn because when she was little she was the color of autumn leaves, and she still is. I say she’s odd because she lets other chickens go up to her and peck all the fluff from her puffy cheeks and beard. Before all the chickens pecked her fluff off we realized she had a waddle underneath! I find that she’s a very friendly chicken and never poops on us (a lot of other chickens do). Autumn lays light blue eggs and was our first Easter Egger to lay. Also, when we let the chickens out for recess we would find blue eggs everywhere BUT the nesting box: the pumphouse, bushes, the barn, you name it. Finally we got the little adventurer to start laying in the nesting box again. 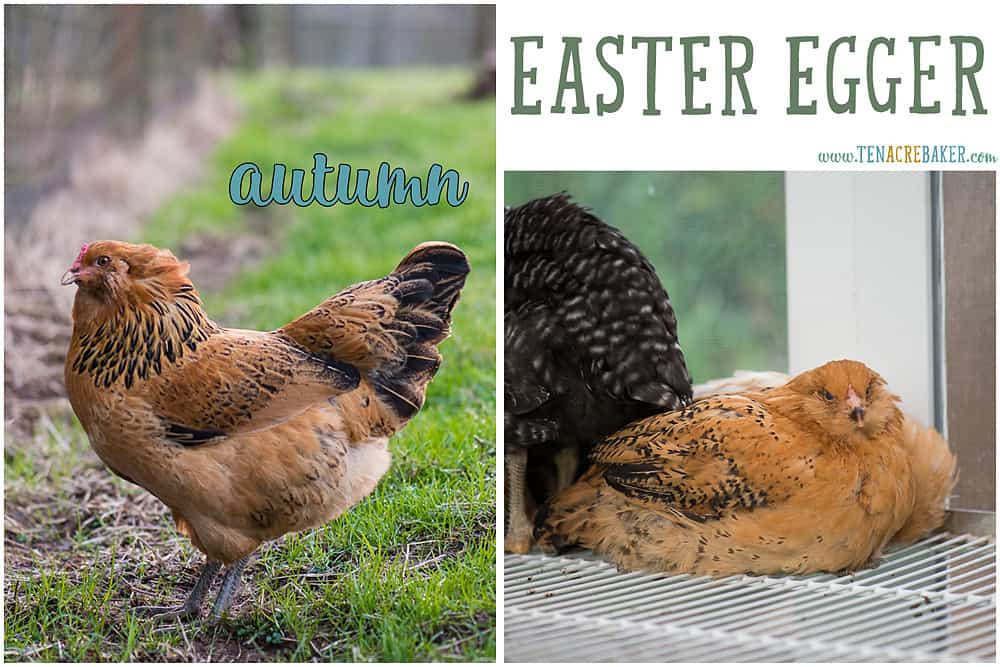 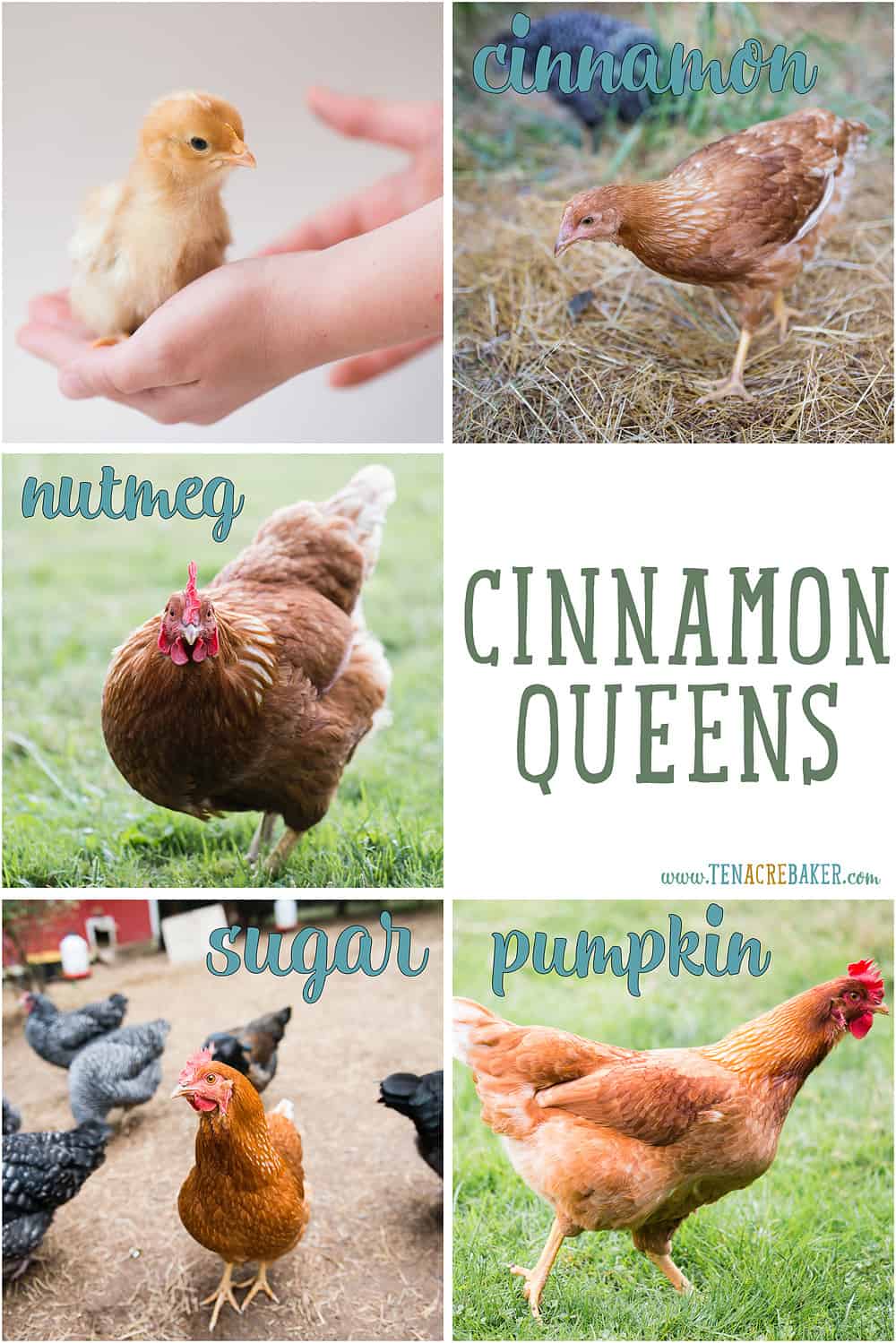 These ladies were named Cinnamon, Pumpkin, Nutmeg and Sugar.  Our kids named all of our chickens. This set of names is the only one that makes a lot of sense.

The Cuckoo Marans were developed in France in the town of Marans during the mid 1800’s. They are known for their deep chocolate brown eggs. The brown egg color can vary in darkness as the hens go through their laying cycles.

The Cuckoo Marans have a black and white feather color pattern similar to the Barred Plymouth Rock, however their pattern isn’t as defined so we are able to tell the breeds apart. 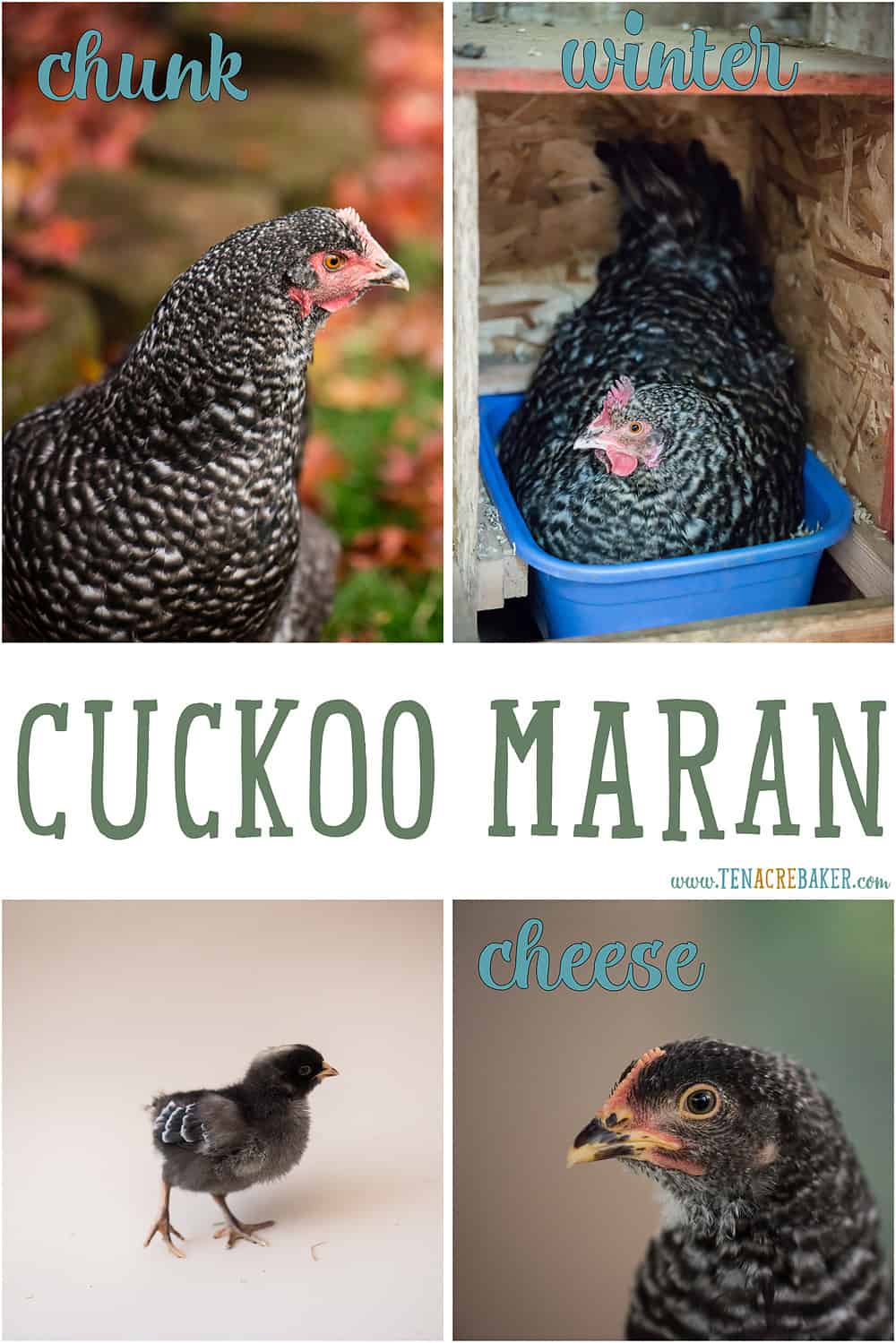 Chunk is our biggest and heaviest chicken. She probably weighs as much as three Salts. Her eggs are huge too.

Winter was our first chicken to go broody… and boy was she broody. After weeks and weeks of being unable to break her of her broodiness, I let her sit on and hatch some fertile eggs. That’s a sad story for another day. Needless to say, we don’t have any of those chickens. Winter was downright crazy when she was broody. Like PMS times 1000. Now that she’s back to normal, she’s a great chicken and makes the most unique noises.

Cheese is our third Cuckoo Maran. No idea why she’s named Cheese.

Our Barred Rocks are just standard chickens. The one chicken we lost was a Barred Rock. She, along with four other chickens, went through a phase where they preferred to sleep in a tree rather than their coop. On Halloween night, they were all up too high for me to get down. The next morning, the remains of one of our Barred Rocks was all over the yard. 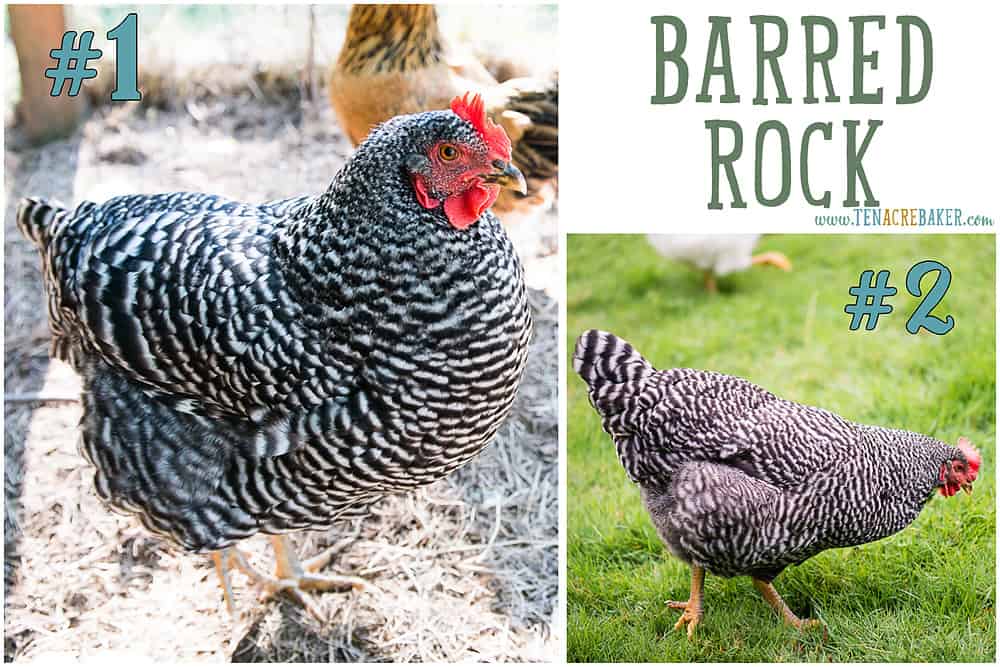 The remaining two are named #1 and #2. We can’t tell them apart and there’s nothing about their personality that differentiates them. They are hard to catch, but are consistent egg layers.

This Speckled Sussex chicken originated in the county of Sussex and is a very old English breed and recognized as a distinct breed in 1914. The Sussex is a very gentle and colorful bird. Their speckled coloring makes them blend in with the background and camouflages them from predators such as coyotes and foxes. With each yearly molt more speckles appear so they become even more colorful the older they get. 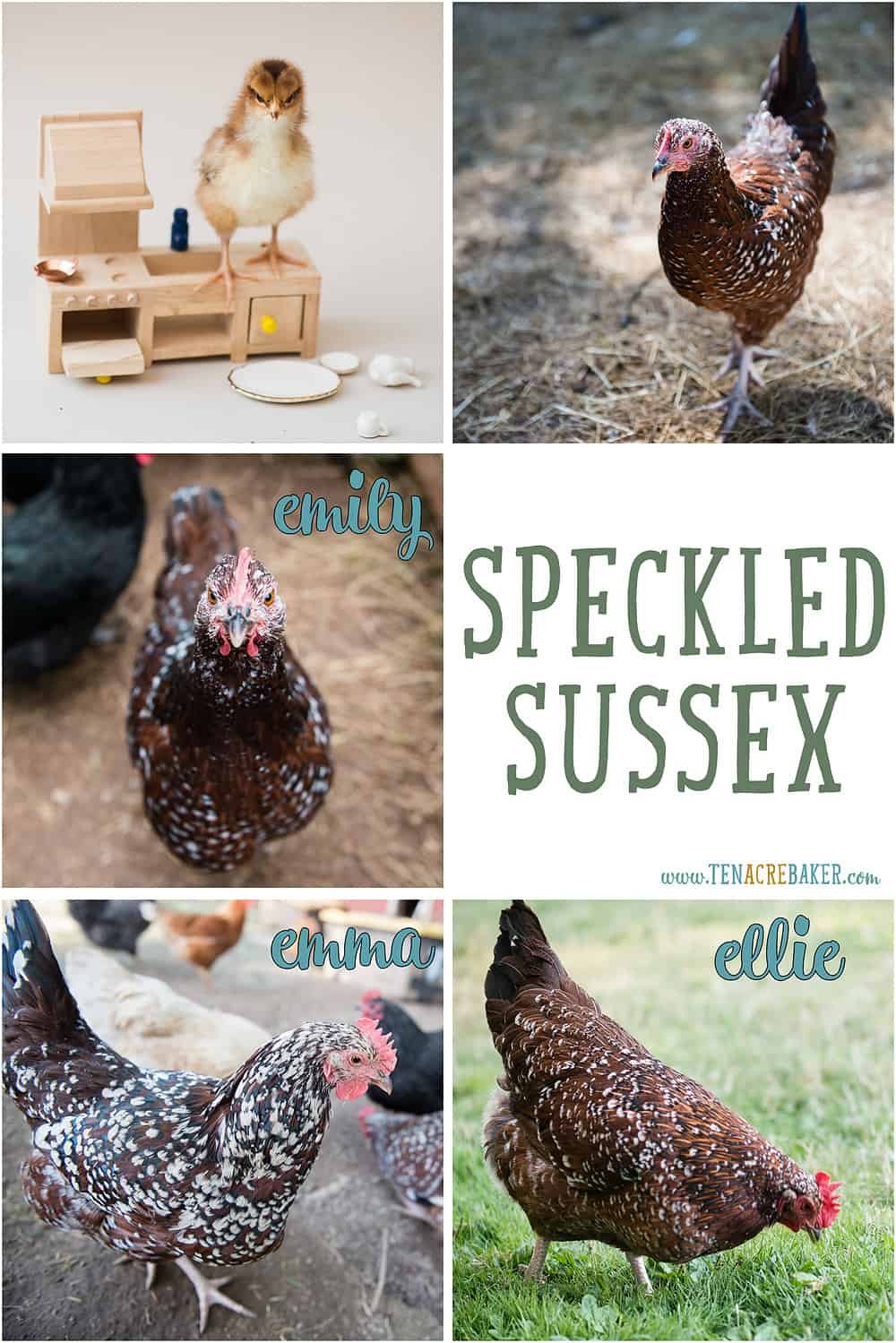 These ladies lay very small light colored (almost white) brown eggs. They are quite entertaining to watch. We have a huge willow tree in our chicken area and the Speckled Sussex are the only breed that jumps up from the ground to grab the leaves.

Ellie is my son’s favorite chicken. He always opens the gate and she is the first one to run out. He brings her everywhere he goes in the yard. He thinks she is super soft and friendly. Emily is very similar, just a bit darker in color.

Emma is rather evil. She picks on the other chickens and bites us if she thinks its food. Each on of us has had the tip of our finger end up in the vice of her beak.

The Black Australorp chickens originated in Australia. They are known for their shiny rich black feathering which turn shimmery green in the sunlight. I have a hard time telling them apart but my son can.

These pretty chickens lay brown eggs that are almost pinkish in hue.

A couple of them went broody but they were quickly broken of their broodiness after a quick stay in the cage of shame.

Again, the kids gave Josie, Vicki (aka Queen Victoria) and Dogfood their names. Dogfood actually ended up in the mouth of our stupid neighbor’s Beagle when she was about 5 weeks old, but fortunately my daughter grabbed the dog and the chicken got away. Hence the name. 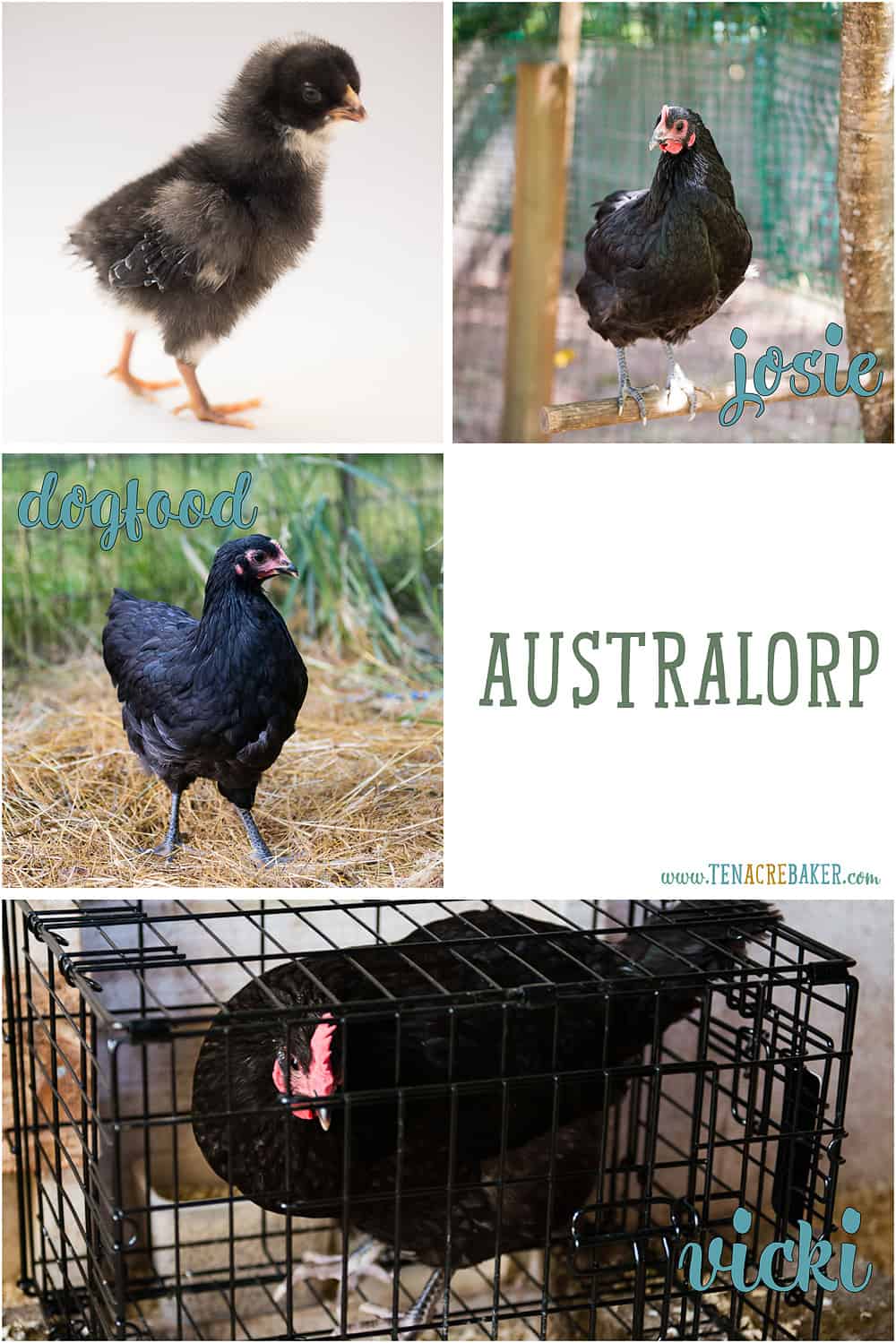 As you can probably tell, our backyard chickens aren’t just livestock. They are our pets. In the time that we’ve had them, we’ve healed injuries and modified their living area multiple times to make their environment the best possible.

Never did I think we’d be chicken people, but we are!

We have a group that’s just for you!

I invite you to join! We’re building a fun homestead-loving community!!!

When you move from the suburbs and find yourself on 10 acres with goats, chickens, and farm-to-fork living... I don't know what I'm doing, but I'm determined to figure it out along the way! Read More…

Ever wonder why someone would decide to move from a convenient low maintenance house to a home in the country with a never ending to do list? Find out why we did…