See how much a raised vegetable garden can change over the course of a month!

This vegetable garden completely transformed from May to June! 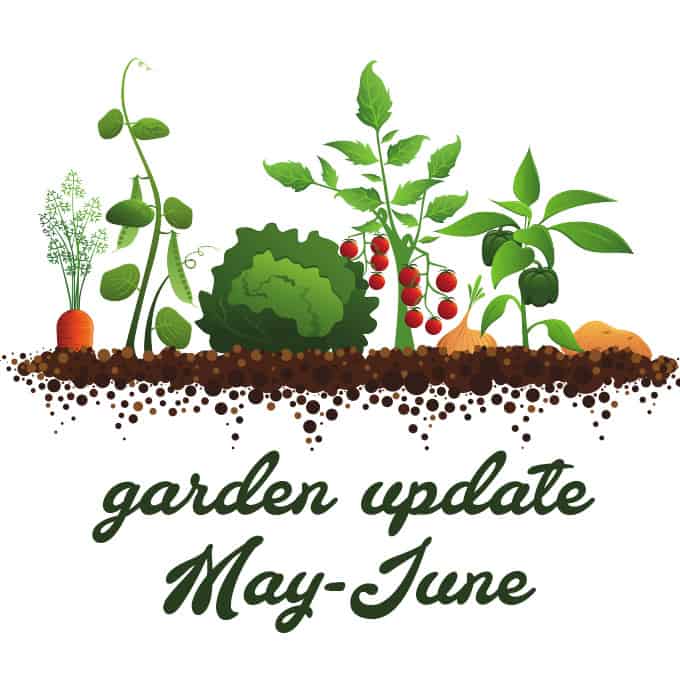 Pin it to your VEGETABLE GARDENING BOARD to SAVE it for later!

I can't wait to show you how much has changed in Vegetable Garden over the past month. All of these photos were taken exactly a month apart, from mid-May to mid-June. I plan to come back every month with a mid-month update to show you how much has grown, what's been destroyed by birds and bugs (it's bound to happen, right?), and what I've replaced.

As you scroll through my post, please keep in mind that I have no idea what I'm doing and I'm learning as I go. If you ever have any tips and tricks, please leave them in the comments. This will not only help me, but anyone else who happens to stumble upon my blog!

I started both the zucchini and summer squash in the green house from seed. The zucchini (seen below in the top picture) grew and transplanted well. The summer squash, well, not so much. I ended up planting three summer squash seeds directly in the raised bed and they grew from there.

As you can see, it's thriving. 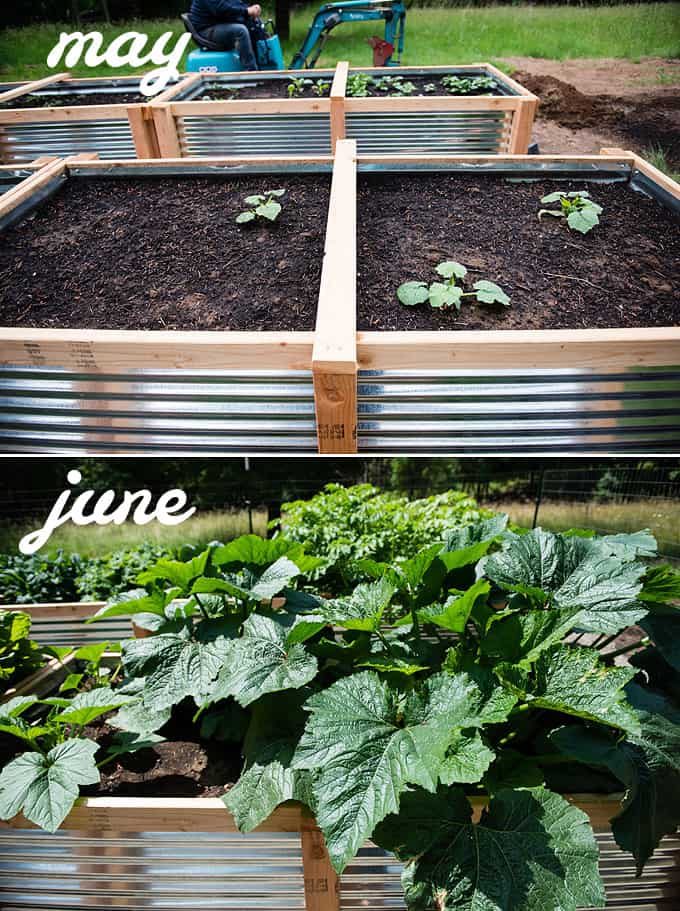 These are a few of the plants that I did not start from seed this year. I bought the rhubarb in a gallon container and the strawberries were transplants from my mom's yard.

Rhubarb is a perennial meaning it will keep coming back every year. I believe you can't harvest it the first year, but I should be able to starting next spring going forward.

The strawberries took very well to their new home, produced a handful of strawberries, and are currently in the process of trying to take over the entire bed. I need to learn to be quicker than the birds and the slugs or I will never enjoy these ruby red Pacific Northwest gems. 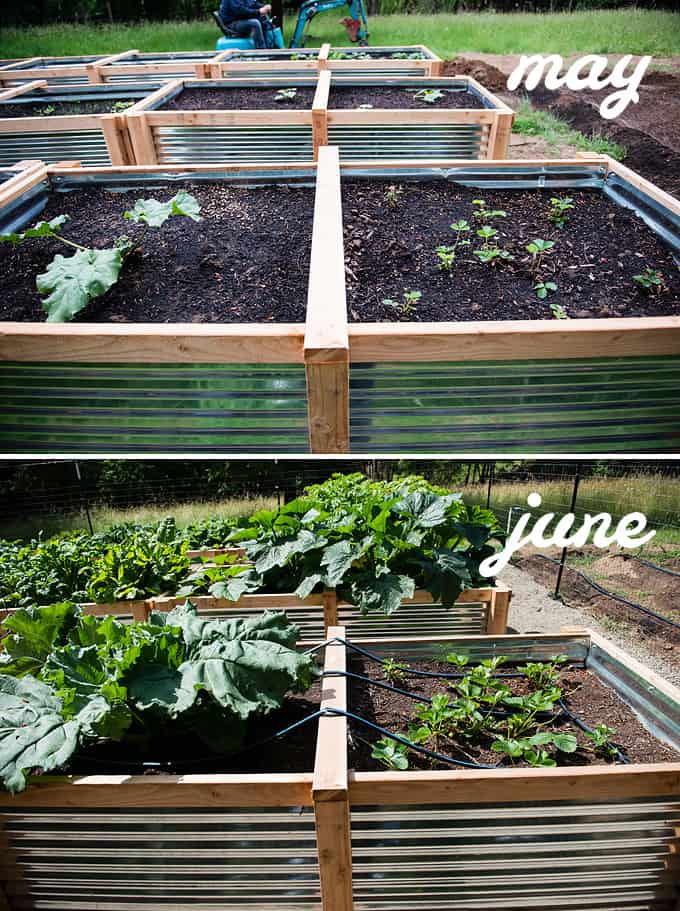 These were all planted from seed and are doing quite well.

The first to be ready were the radishes. I couldn't believe it. In like 3 weeks, they went from seed to salad! I'm thinking the radishes all need to be harvested when they're pretty young because I've pulled a few out recently and they were so hard and woody that I couldn't even slice them!

I got my peas in the ground late this year because I was waiting for the beds to be completed and the compost to be delivered. I'm hoping they'll start to produce soon. We (whenever I say we, I usually mean my husband and son) build a trellis out of PVC pipe, wood and wire. I'll explain how we did that in a future post.

I have about 4 different kinds of carrots growing. No idea if I should thin them out or just let them go.

The turnips are growing well. I just need to figure out what to do with them. Pot roast, maybe? 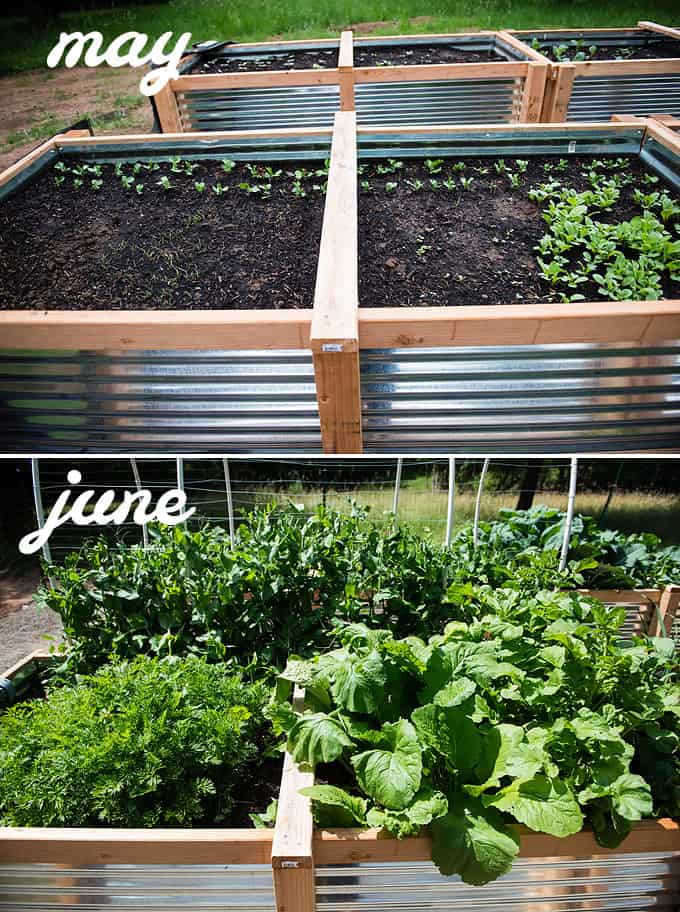 Oh, how I do love me some beets. If you're familiar with my other blog, you'd know that I'm a fan. I'm thinking I need to get more seeds in the ground because this is simply not enough beets. There are never enough beets. I could have an entire vegetable garden dedicated to beets.

The leeks were started from seed as well. No idea how long it will take for them to be ready. Hopefully it will be in the fall when I'm ready to make nothing but soups and stews.

Ration and amounts will be interesting this year. I'm thinking I planted way too many cucumbers and not enough green beans, but we'll see. I'll make a ton of pickles and will force the kids and husband to eat the rest.

It's hard to see the cucumber plants through the peas, but they are there and they are thriving. 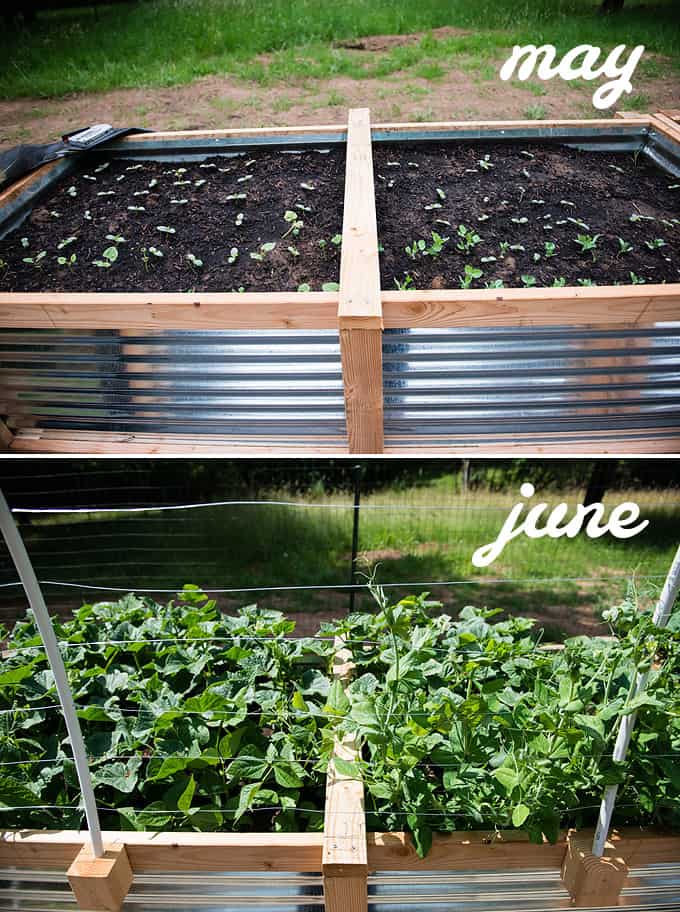 All of these veggies were started from seed in the greenhouse and then transplanted.

The Brussels sprouts are riduculously healthy. My friend told me she's never been able to grow them because the bugs get to them. So far, I have been lucky in this department. If you've never watched water dance off the leaves of a Brussels sprout plant, you must add it to your bucket list. Mezmerizing.

I planted my broccoli way too close, so I eventually thinned it out and filled up any remaining space in the box. Hopefully this will allow crowns bigger than a silver dollar to grow. Who knows.

I'm excited to see how the celery grows! I was told that I can cut the entire stalk at the bottom and a new one will grow. I'll let you know how that goes. 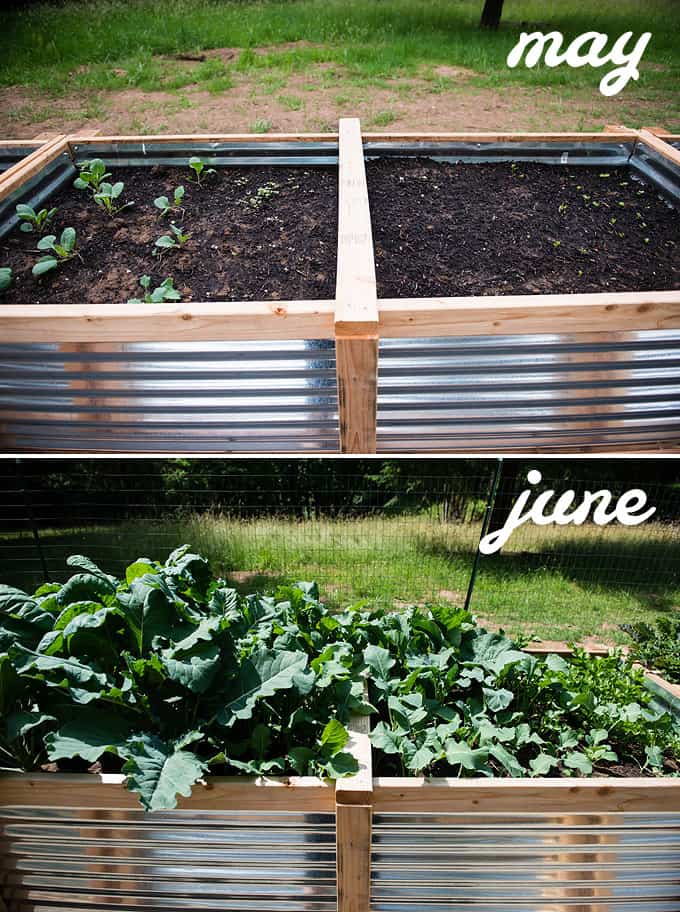 So... I have a crapload of kale. I've been cutting it every day for my egg scramble and dinner salads, but it doesn't seem to make a dent. Anyone want any kale? 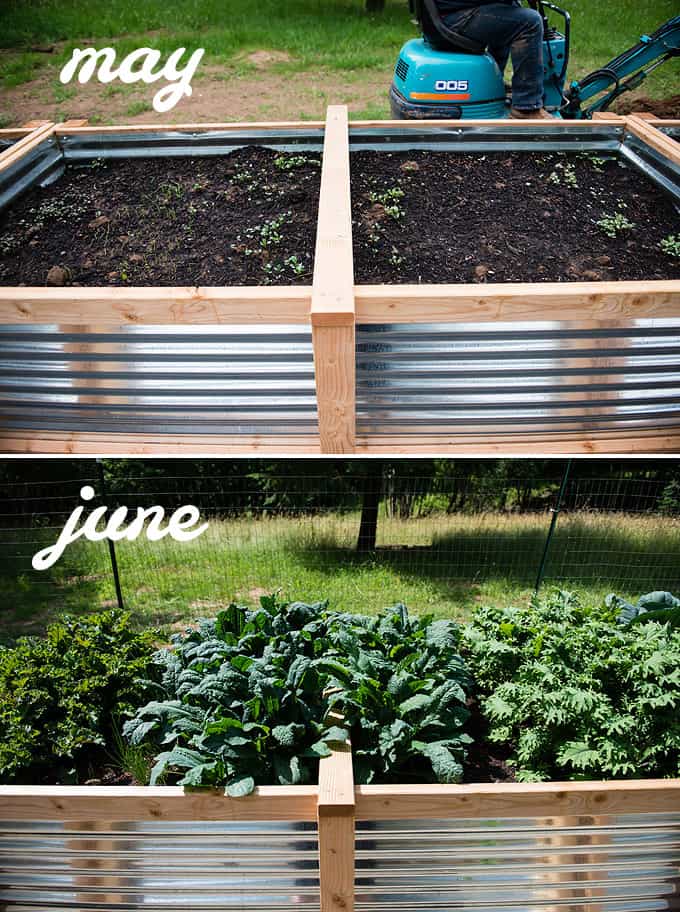 This just might be my favorite raised bed in my vegetable garden.

I've never grown potatoes before. I bought organic seed potatoes (3 different varieties), stuck them in the ground, and these plants shot up. I later learned that I could have planted them lower and once the plant started to grow, I could bury it and it would create another row of potatoes. Repeat. Repeat again. And keep on burying until you have more potatoes than you know what to do with.

I dug up some purple potatoes once a plant started flowering. They were small but oh-my-god they were amazing. I'll let the rest grow some more, but I've been craving them ever since.

And I just think purple cabbage is so darn beautiful. 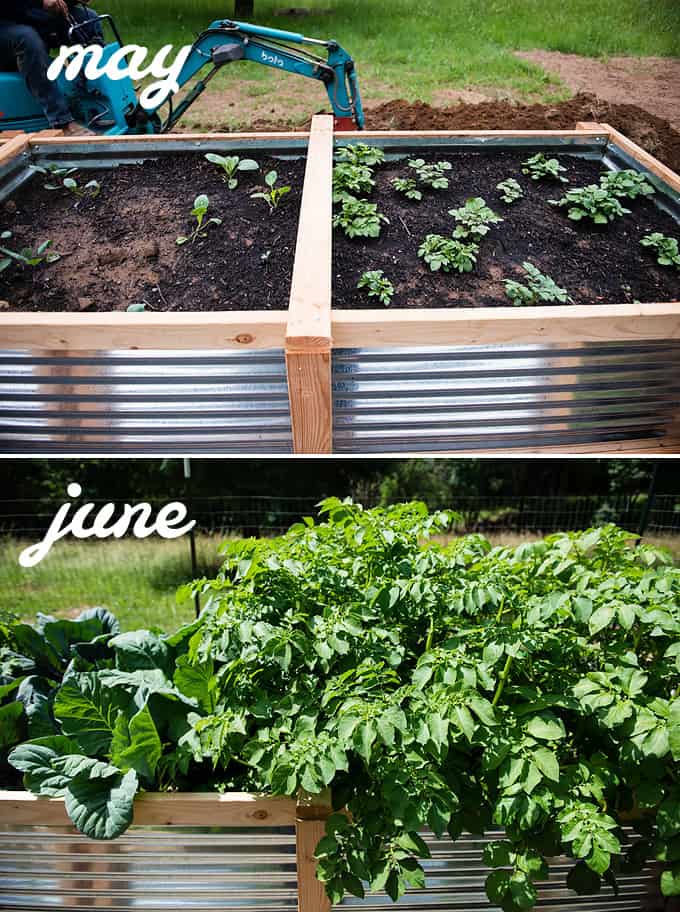 I have grown the largest spinach leaves I've ever seen in my life. I've been picking it and eating it, but it's starting to go to seed. I think I need to cut all the spinach and see if more grows. Will someone tell me what to do?

The rainbow chard is gorgeous. I just need to figure out what to do with it. 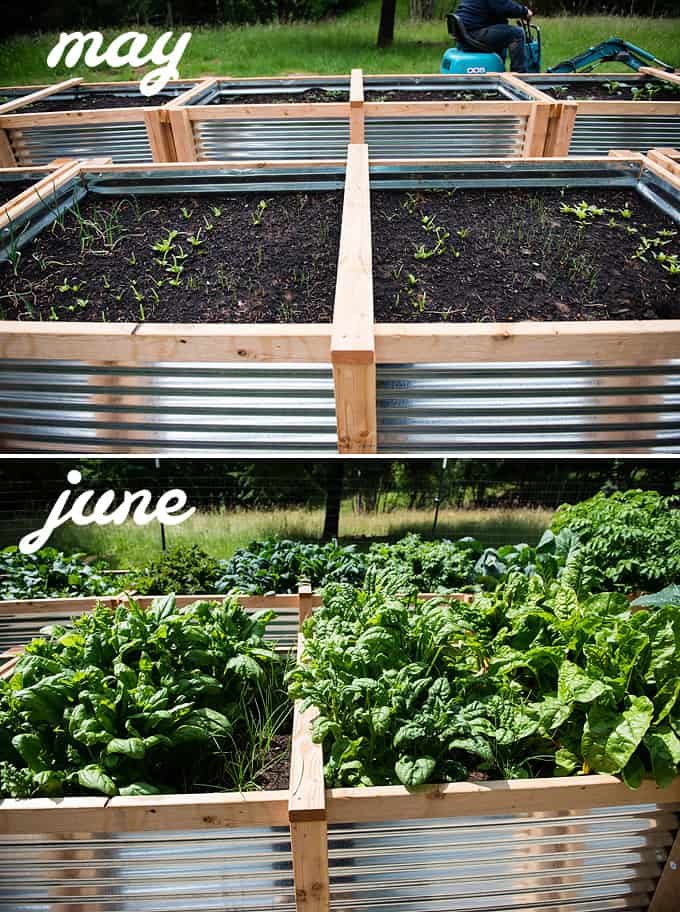 Last, but not least, we have the rows in the ground.

We (again, I say we but I mean my husband) rototilled the earth using the tracker and the rototiller-thingy. We didn't cut or eliminate the grass before we tilled everything up, so grass and weeds will be a bit of a battle this year. I figure that I can pull them out when I need a mindless activity (believe me, I need them because my brain never shuts off). Then, the more we pull, the better the soil will be every year. We also mixed in some compost, but probably not as much as we should have.

Everything was planted from seed.

The ground was dry when we stuck the seeds in the ground and then I probably watered harder than I should have. That being said, I had a bunch of melons or sunflowers (not actually sure what they are) growing in a place where all the water would puddle at the end. I just transplanted them into the rows. It'll be like unwrapping a present once they finally produce something! 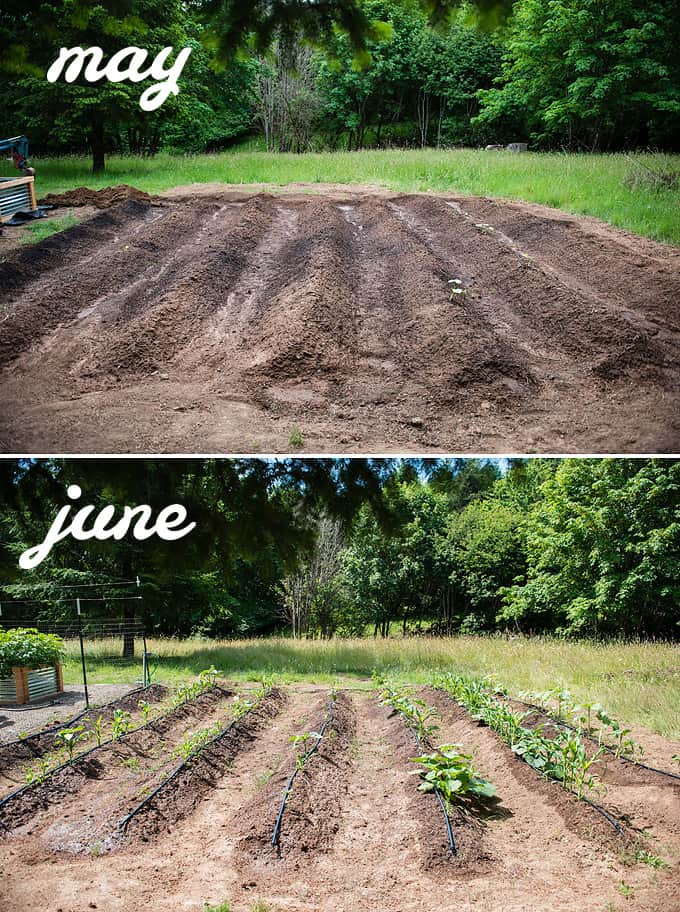 Tomatoes and peppers were a vital part of my vegetable garden.

Not showing pictures this time around because they were still in the green house in May but they are in the raised beds now. They would all be dead right now if it weren't for my wise friend, Kendra. Any time I talk about gardening advice given from a friend, it most likely came from her. Turns out I didn't transplant them correctly. I'll probably right a post about it, so I'll leave you hanging in suspense until then.

My peppers aren't looking so hot. Not sure if they'll do anything this year. I'll let you know next month!

I did sprinkle a few lettuce and herb seeds here and there in my vegetable garden, but I also created a cutting garden just outside my kitchen.

The kitchen garden, however, is very small, planted in store bought round cedar planters, and only has lettuce and herbs. I'll share pictures of that later.

We have a group that's just for you!

I invite you to join! We're building a fun homestead-loving community!!!